End of an era

Nut Island's Peace has been up and running for almost a year now, I started the blog in early December last year. So almost a full year of Finnish traditions and habits are now behind.

I've decided to put the blog on hold. I feel like currently I don't have enough things to say nor enough time to write. I won't delete the blog, it will remain here in Blogger as inactive - in case somebody visiting Finland finds this useful. But there won't be anymore posts, at least for now. I will continue in my good old handicraft blog, in Finnish though.

Thank you, dear readers! And let's be careful out there.
Posted by Katri at 6:46 PM 2 comments:

Email ThisBlogThis!Share to TwitterShare to FacebookShare to Pinterest
Labels: nut_island

Have you noticed that in new and newly renovated apartments there are two drains in the bathroom floor? Do you know why? Because the national building standards say so. The standards contain such a requirement because Finnish people tend to pass out in the shower, usually on top of the drain. So the other one is a back up drain to prevent the shower from flooding into other rooms. 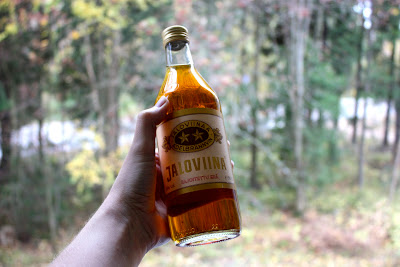 When people talk about Finland and alcohol, Koskenkorva vodka pops up sooner or later. But if I had to nominate our national booze, it would definitely be Jaloviina, noble booze. Koskenkorva is so straight forward and boring, Jaloviina has much more character and nuances. Jaloviina manages to be rough and elegant at the same time - and therefore it suits every possible occasion.

Jaloviina is a mixture of brandy and vodka, some call it "cut cognac" - the vodka cuts off the bitterness of cognac. Nowadays there are two editions available at Alko: one-star (Jaloviina*) and three-stars (Jaloviina***). Jaloviina* contains 1/4 of brandy, and Jaloviina*** contains about 3/4 of brandy - or at least that was the case originally, nowadays the portions are classified as confidential. Last spring Alko sold a special edition of two-stars (Jaloviina**), which had 50-50 brandy and vodka. How many stars are idea, that's a matter of taste and epic debate

As I wrote earlier, Jaloviina suits for any occasion. It also goes nicely in simple drinks: Jallu-cola (Jaloviina and Coke) is a classic. However, my personal favorite is Jallu-Pommac - a drink made of Jaloviina and flavored soda called Pommac; a perfect summer drink that was originally developed for Helsinki Olympic games in 1952. Jaloviina also strengthens nicely otherwise so boring desserts: pour some Jaloviina into chocolate mousse to reduce the sweetness, or moisturize a dry cake with suitable amount (from couple of table spoons to couple of deciliters) of Jallu. One of the best fish soups I've ever tasted was made of salmon, potatoes, onion, morel, cream and Jaloviina*.
Posted by Katri at 8:34 AM No comments: 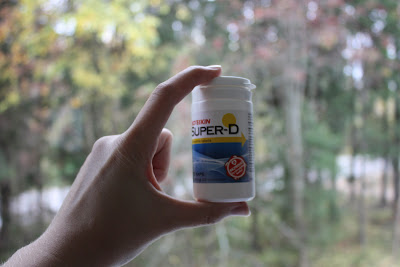 Say goodbye to sun, from now on it's going to be 5 months of darkness. Since the sun will not show up too often for the next half of the year, you should compensate the lack of sun light by eating vitamin D from the can. Older people easily think vitamin D is just another stupid fashion, but they don't realize, that they've grown up with fish liver oil, which also contain lots of vitamin D - featured with horrible flavor. Also adults need vitamin D, not just kids.
Posted by Katri at 11:16 AM No comments:

Tax card - print it out From this day on it is possible to print your own tax card - so you don't need to wait for the paper copy to arrive by the snail mail. But be aware, if you print it, you won't receive it by mail - they don't make double deliveries. I wonder if the company accepts a pdf version or do they require the printed copy?
Posted by Katri at 10:43 PM No comments:

It's the last day of my summer holiday, so it's time to sum up the summer: 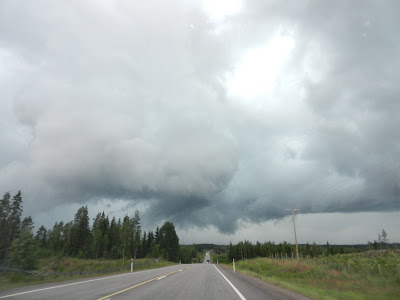 Raining in the horizon on the way to summer house 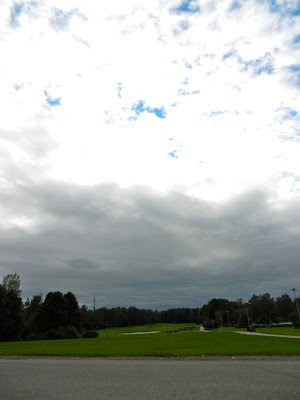 Raining in the opposite end of Silkkiniitty. 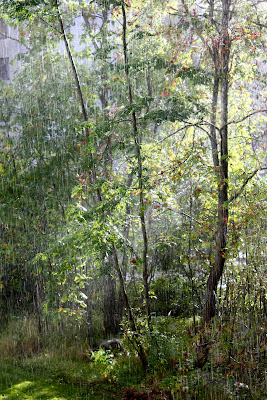 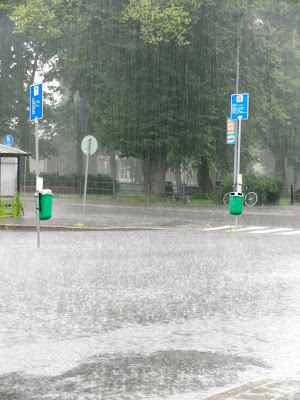 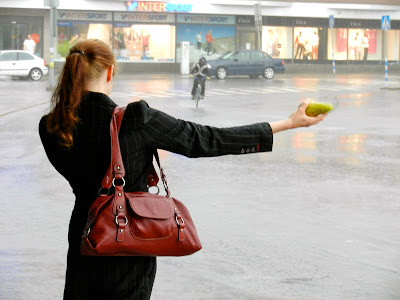 Lady at a bus stop washing a pear in the rain 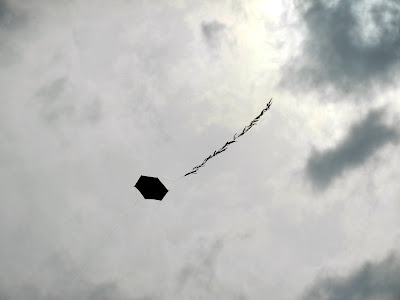 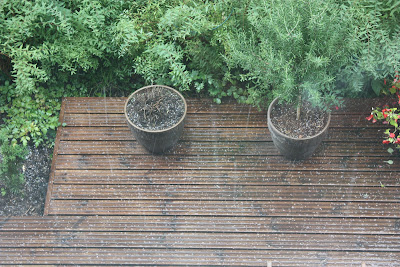 Email ThisBlogThis!Share to TwitterShare to FacebookShare to Pinterest
Labels: weather

In Eastern Finland there's a tradition of bringing a pulla circle to a family of a new born baby. This "pulla of new born" is called rotinat. Sometimes something in my head just snaps, and I feel like it's my job to carry the tradition on - and one of those snaps occurred yesterday. So I decided to bake rotina-pulla to my friends who had recently gotten their first child. 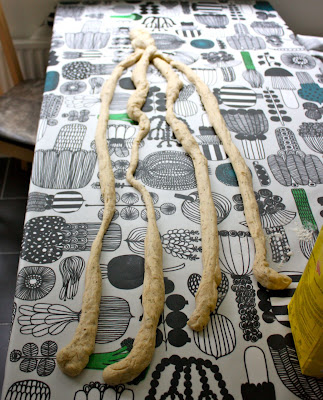 For a rotina-pulla you need to make a plait out of the pulla dough. And you're suppose to make it out of four strings. So I rolled two bars, both a bit over 2 meters long, crossed them at the middle and started knotting. I'm not an expert of making pulla plait, so the knotting part required some focus. Of course the dough bars somehow stretched at some parts and turned out to be extra thick at some other parts. But eventually I was able to finalize the plait. At this point I realized I had forgotten the egg from the dough. But after all the sweat, tears and swearing I turned into John Lennon: "let it be". So off we went without the egg. 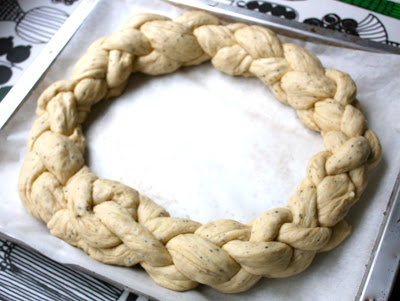 Then I wrapped the plait into a circle and put it into oven for 25 minutes, 190 celsius degrees. It got some rip marks in the oven, my grandma would give me a note because of those - but it's good enough for me. Traditionally, you're supposed to fill the center of the circle with cookies, but I think for a modern house wife there's enough baking with just the pulla itself. 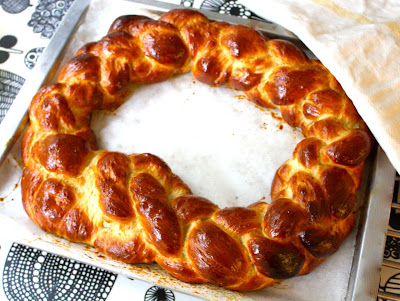 I've now done rotina-pulla three times: On the first time it turned out to be ugly but eatable. The second time was beautiful but inedible. Third time the charm? Well, I forgot the egg and the pulla got rip marks, but I heard it tasted good.
Posted by Katri at 8:53 PM No comments: