5 years ago we had some 40 minutes to kill before the beginning of our wedding ceremony. So we decided to pop into Ateljé Finne for a glass of sparkling. The brunch time was already over, and there were still couple of hours until the dinner time, so in theory the restaurant was closed. But luckily there were the Madventures guys Riku and Tunna having a very long brunch with their friends, so we could also stay for a while. The sommelier asked "whose big day is it?". "Ours", we replied. "Then it's on the house", he said.

Yesterday, on our 5th anniversary, we decided to return. Well, we have been there with friends, together and separately, during these 5 years - but not just two of us. 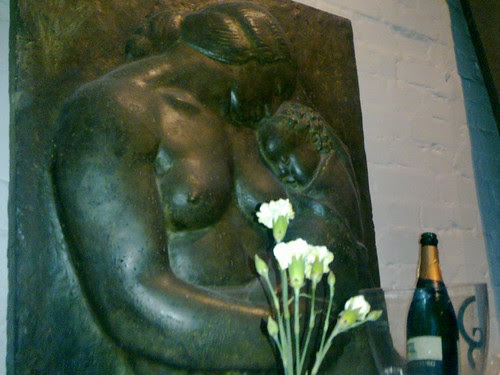 It's probably partly nostalgia, but I like Finne a lot. The place is really a former studio of sculptor Gunnar Finne, and some of his pieces are still present at the restaurant. And the food... oh! I guess the food could be categorized as modern scandinavian. I'd say it's rustic fine-dining, made of really high quality seasonal ingredients. And if you you happen to be served by the sommelier, he'll introduce you the most beautiful wines that match perfectly with the dishes.

I had a steak tartare for starter. I've never eaten tartare before, but Finne is one of the only places I dare to have that. And it was delicious. Not yucky at all, but fresh, salty and sour at the same time. As the main course I had a fish cake made of lightly smoked fish, nettles and fresh peas - and it was fantastic. In places like Finne it's ok to have meat, you won't be disappointed - but the fish dishes are just so phenomenal, that shame on you if you miss the fish. The dessert I had is the classic of Finne: licorice créme brûlée. There are very few sweets I like, but this one was just perfect - maybe because it wasn't too sweet.